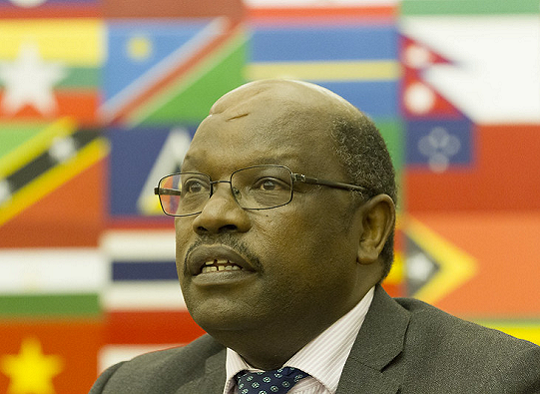 Considering the growth and portfolio of the organization, ARCOS Board of Directors meeting of 4th August 2022, resolved to change the title of Dr Sam Kanyamibwa from Executive Director to Chief Executive Officer with immediate effect. This resolution was unanimously endorsed by the General Assembly of 5th August 2022.  Dr Kanyamibwa founded ARCOS in 1995 and occupied the position of Executive Director since 2009.

John Yonazi Salehe, Chair of the Board, commented:

“The General Assembly and the Board of Directors welcome the appointment of Dr Sam Kanyamibwa as the Chief Executive Officer. We are confident that his experience and enthusiasm will keep positioning ARCOS as a leading conservation organization in the Albertine Rift Region and beyond. Sam has a great track of record of achievements and he is the right leader to take ARCOS to the new chapter of championing resilience to climate change, community development and biodiversity conservation in Africa.”

“It has been a great pleasure serving ARCOS as Executive Director for the last decade. As Chief Executive Officer, I am excited to lead the organization to its next level. It has been a privilege to contribute not only to the creation of the organization but also to its development. I have seen the organization growing from one to over a hundred fulltime staff in the region and all along these years, I have been supported by an incredible team of Board of Directors, and I am grateful for the support from our partners and donors as well as the passion of our members.”

Dr Sam Kanyamibwa founded the Albertine Rift Conservation Society (ARCOS) back in 1995. Dr Kanyamibwa is a professionally qualified conservationist, with over 30 years of experience in conservation at international level, particularly in Africa. Dr Kanyamibwa led the development of research and monitoring at Nyungwe Mountain Forest with Wildlife Conservation Society in early 1990s. He then moved to Cambridge in the UK to head the Africa Programme at UNEP-World Conservation Monitoring Centre before coming back to Africa in 2000s as a Regional Representative of WWF for the Eastern Africa Region. Later, he became the Deputy Director for WWF-Africa and Madagascar Programme until 2007 and he was also the Regional Director for AWF during 2008/2009. From 2009 up to this year, he was occupying the position of Executive Director of ARCOS. Dr Kanyamibwa is author and co-author of over 50 publications and Member of several national and international committees. Read more about Dr Sam Kanyamibwa’s biography.

Who We Are
What We Do
Our Approach
Get Involved
Updates